Military prosecutors have filed indictments against three Palestinian men accused of carrying out a deadly shooting spree in December in which an Israeli, Yehuda Dimentman, was killed outside the illegal Homesh outpost in northern the West Bank, the Israel Defense Forces said.

The three men – Muhammad Youssef Jaradat, Mahmoud Ghaleb Jaradat and Ghaith Ahmed Yassin Jaradat – have each been charged with “intentionally causing death”, the equivalent of murder in the military justice system, although only two of between them were suspected of having committed the murderous act. shoot themselves.

Their charges came a week after a similar indictment against a Palestinian teenager who allegedly drove the getaway car used in the attack. As a minor, the teenage suspect’s name cannot be released.

According to the Shin Bet security agency, the four suspects carried out the attack on behalf of the Palestinian Islamic Jihad terror group.

Ataaf Youssef Muhammad Jaradat, the minor’s mother and one of the adult suspects, was also to be charged with failing to prevent the attack and later helping them, as her teenage son told her about the plans at the advance and helped hide the weapons they used after the attack, the military said. A number of other Palestinians were also accused on Thursday of failing to prevent the attack and of being involved in selling the weapons used in the attack.

According to the indictment, the three men who carried out the attack had planned the shooting in advance, choosing the targets – Israeli settlers – and the location – Homesh – and planning their escape route. Two of them also planned to steal the body of one of their victims to use as bargaining chips, the IDF said.

On December 16, the three suspects arrived on the road outside the Homesh outpost, where settlers illegally operate a yeshiva, or religious school, and waited several hours for a car to leave the area. It was the second time they had attempted to carry out the attack, having waited outside the outpost on December 10 for several hours, but finally gave up when no cars passed.

When the car carrying Dimentman and two other yeshiva students passed on Dec. 16, two of the suspects took up positions along the road armed with guns, while the third ran for the emergency car. As the settlers’ car passed, the two gunmen began firing, each firing 20 rounds before one of their guns jammed. They then fled in the emergency car. Dimentman suffered fatal injuries and the other two passengers received minor injuries.

The three suspects, along with the minor who acted as a driver, were arrested three days later in the village of Silat al-Harithiya and have since been detained by the army. 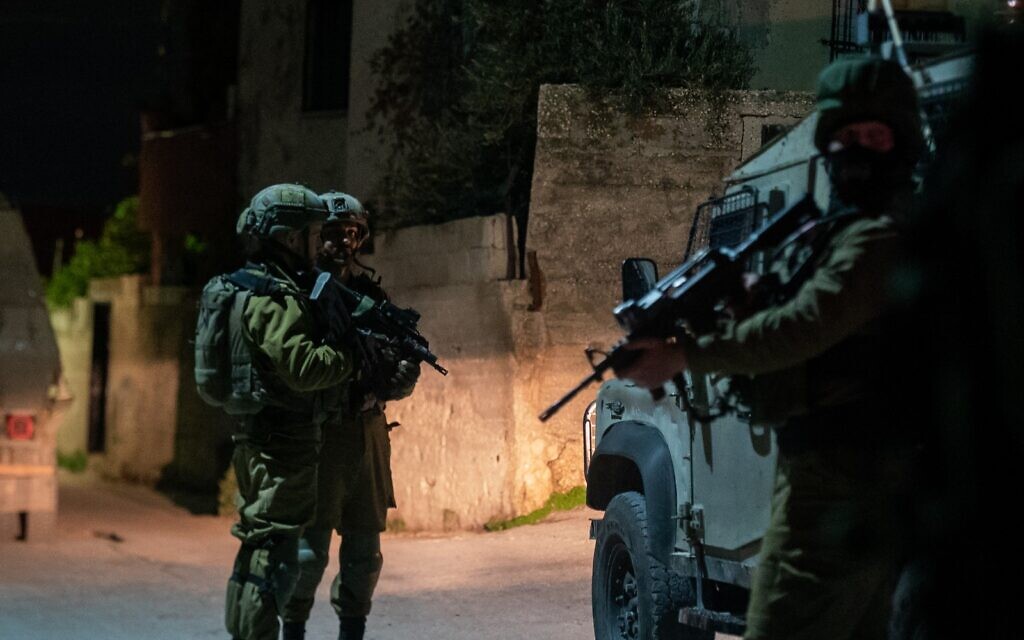 IDF soldiers operating in the Palestinian town of Silat al-Harithiya in the West Bank on December 20, 2021. (Israel Defense Forces)

The weapons they used were found hidden under the stairs of the teenage suspect’s home as they intended to carry out another attack, prosecutors charged.

The families of three suspects – Muhammad Youssef Jaradat, Mahmoud Ghaleb Jaradat and Ghaith Ahmed Yassin Jaradat – were told by the military that their homes would be demolished.

As part of a punitive policy, Israel demolishes the homes of Palestinians accused of carrying out deadly terrorist attacks. Over the years, however, a number of Israeli defense officials have questioned the effectiveness of the practice, and human rights activists have denounced it as unfair collective punishment.

Homesh, where the illegal yeshiva still operates, is a former settlement that was emptied during an eviction in 2005 – the so-called “disengagement”. It has been the scene of regular clashes between Israeli settlers and Palestinians from the nearby village of Burqa.

Dimentman, 25, was the father of a 9-month-old son and lived in the nearby West Bank settlement of Shavei Shomron.

Emanuel Fabian and Times of Israel staff contributed to this report.


We’re really glad you read X Articles from The Times of Israel over the past month.