The first year of the Bennett-Lapid government in numbers

This article was published in partnership with Local Call.

Israelis killed more than 90 Palestinians in the occupied West Bank in the first year of the Bennett-Lapid administration, according to data collected by Israeli human rights NGO B’Tselem and published here for the first time. . The figure represents a 60% increase in Palestinian deaths at Israeli hands over the last year of the Netanyahu government.

In total, the Israeli army and police have killed 88 West Bank Palestinians since the inauguration of the Bennett-Lapid government, and Israeli civilians have killed three more. In the case of another murder, it has not been established whether they were killed by a civilian or a police officer.

These figures do not include the deaths of Shireen Abu Akleh (shot last month in Jenin) and Walid al-Sharif (who died in hospital following a protest in Al-Aqsa), where in both cases the culprit has not yet been officially identified. In the case of Abu Akleh, the eyewitness accounts were corroborated by substantial evidence pointing to the responsibility of the Israeli military, which Israel continues to deny.

Unlike the 92 Palestinians killed by Israelis in the past 12 months, between June 13, 2020 and June 13, 2021 — Netanyahu’s last year in power — 57 Palestinians were killed in the West Bank and East Jerusalem. Fifty-two of them were killed by the army and the police, two by settlers and three others by an undetermined perpetrator.

Palestinians look at a car riddled with bullets after Israeli security forces killed three Palestinians believed to have been behind the recent shootings against Israeli soldiers and civilians, Nablus, occupied West Bank, February 8, 2022. (Nasser Ishtayeh /Flash90)

In the beleaguered Gaza Strip, by contrast, the death toll fell sharply, from 232 in the final year of the Netanyahu government to four in the first year of the Bennett-Lapid government. This discrepancy stems, of course, from the fact that the end of Netanyahu’s term saw the Israeli bombardment of the Gaza Strip for 11 days, in what he called “Operation Guardian of the Walls.” One of the fatalities last year was the result of injuries sustained in that attack.

The data also shows a 72% increase in Israeli casualties on both sides of the Green Line: 23 Israelis were killed in the first year of the Bennett-Lapid government, compared to 13 in Netanyahu’s final year. Fifteen of the 23 killed were civilians, all of whom fell victim to a series of deadly attacks by Palestinians inside the Green Line from late March to early May 2022.

Five of those killed were members of the army and police, and two were foreign workers. Another civilian, Ken Ben Mocha, was shot dead by the IDF brigade commander for the Binyamin area of ​​the West Bank at a busy junction in southern Israel, after it was alleged he snatched a weapon from a soldier. The data does not include three Palestinian citizens of Israel who carried out attacks and were later shot dead.

Figures that Haaretz journalist Hagar Shezaf obtained from the security services and released last week show that there has also been an increase in settler violence in the West Bank over the past year. Data shows that there were 650 incidents of nationalist violence against Palestinians in 2021, compared to 500 in 2020. In the first five months of 2022, more than 400 such incidents have already been reported.

Regarding the demolition of Palestinian-owned buildings in the West Bank, it appears that the Bennett-Lapid government has maintained a similar pace to its predecessor: about 57 demolitions per month, on average.

Israeli soldiers and border police stand guard as Israeli bulldozers demolish a Palestinian building, in the village of Yatta south of Hebron in the West Bank, October 17, 2018. (Wisam Hashlamoun/Flash90)

Abeer Baker, a human rights lawyer who represents Palestinian prisoners, said in response to the figures: “There was some hope that fascism would decline, but for the Palestinians there is no period of calm. From the point of view of daily life and killings, the occupation policy remains the same. The new government has the same agenda, they are just more subtle in terms of incitement, passing fascist laws quietly.

Issa Amro, a Palestinian activist from Hebron, told +972: “Since the formation of the Bennett government, we have seen an escalation in the West Bank: more settler violence, more army raids, the army opens fire indiscriminately, the soldiers feel that the Prime Minister has their backs, that they have the green light to do what they want with impunity.

“The right is both in government and in opposition,” Amro continued, “and I don’t hear any voices inside the government – from Meretz or Yair Lapid – trying to bring their government into the meaning of their own ideology, their only objective is to survive, at the expense of human rights and the lives of Palestinians. 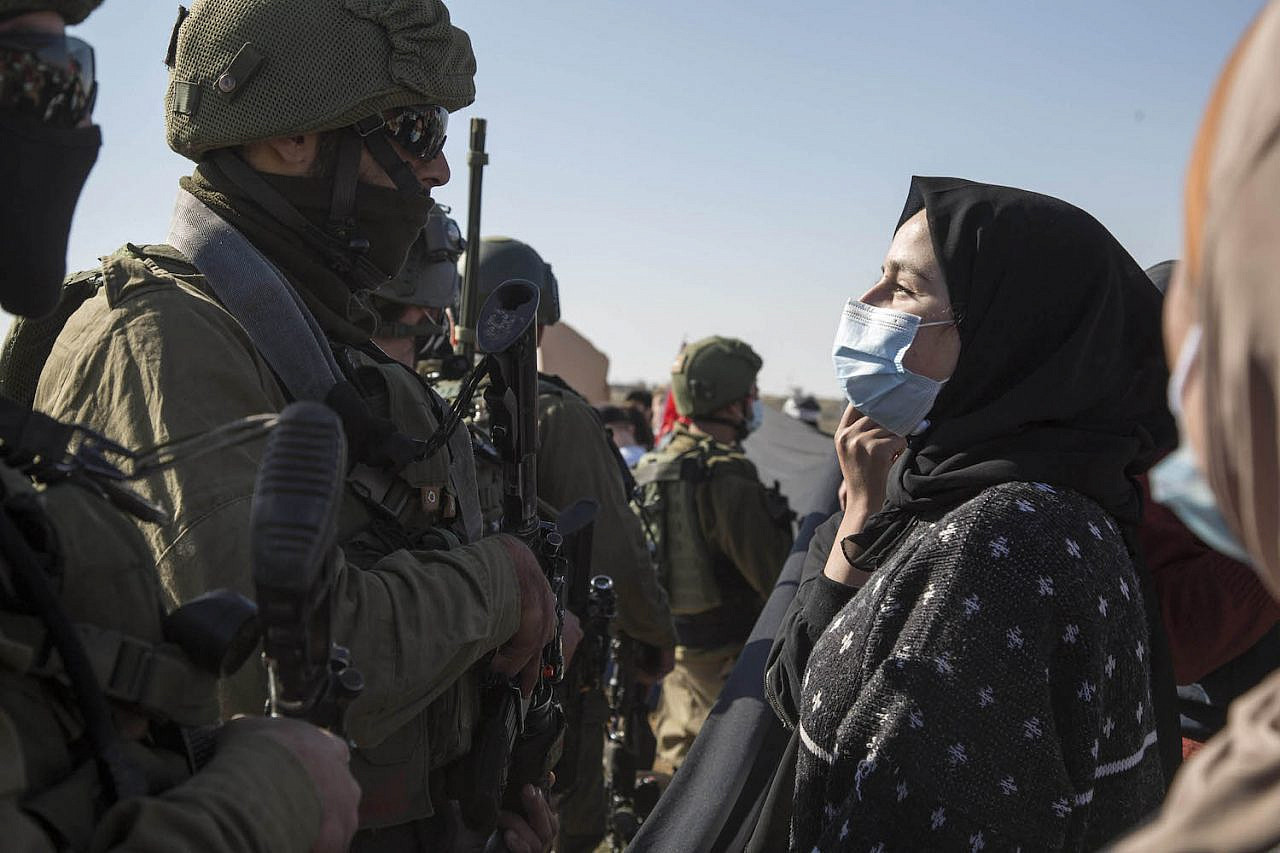 Palestinians and Israeli activists demonstrate against home demolitions and settler violence in the village of Al-Rakiz, south of the Hebron Hills in the West Bank, January 8, 2021. (Keren Manor/Activestills.org)

“Even the murder of Shireen Abu Akleh was not a big story for them, which calls into question their participation in government. Had this happened during Netanyahu’s tenure, the reaction from the public and the political system would have been stronger.

B’Tselem’s director of field research, Kareem Jubran, added: “Violence against Palestinians, and the fact that its perpetrators – from junior soldier to senior echelons, ministers and Supreme Court justices – all enjoy impunity, is a major component of the apartheid regime. This is not a bug, it is the system itself. This is true of all Israeli governments, past and present. The only way to end violence is to end occupation and apartheid.

This article first appeared in Hebrew on Local Call. Read it here.