Delays affecting the construction of Tel Aviv’s highly anticipated light rail will push its opening to the middle of next year at the earliest.

Problems with the network’s signaling system mean the inaugural light rail line will not open in November as planned, with other planned lines also experiencing setbacks.

Officials from NTA Metropolitan Mass Transit System, the government corporation that is developing Tel Aviv’s public transit system, recently informed the Department of Transportation that it does not expect to be able to open the red line in time, the city reported. Channel 12 last week. Instead, estimates now place the line opening sometime in the second or third quarter of 2023, according to the report.

The delay comes after officials last year pushed back the opening time from August 2022 to November 2022.

The traffic jam is caused both by delays in completing some stations and by problems with the signaling system. The system controls the movement and synchronization of trains across the entire network, which consists of 34 kilometers (21 miles) of track and 34 stations.

The Red Line, which will run from Petah Tikva south to Bat Yam via Tel Aviv, is the first of three planned light rail lines, which will include underground sections, as well as the proposed addition of three subway lines.

The system is expected to significantly reduce traffic congestion in Israel’s financial and cultural heartland, which has few public transportation options aside from buses, shared taxis and an intercity commuter train.

The construction of the other two planned light rail lines is also behind schedule. The initial section of the Purple Line, between Arlozorov and Hayarkon streets in Tel Aviv, is expected to be delayed for at least three years beyond its original scheduled launch date of 2027. The line will eventually cross Ramat Gan and reach Yehud .

The Green Line, which will eventually run from north Tel Aviv through the city to Rishon Lezion, is also facing a minimum delay of 23 months, due to delays on a section of the track passing through Ramat. Hachayal, whose construction has not yet started. . 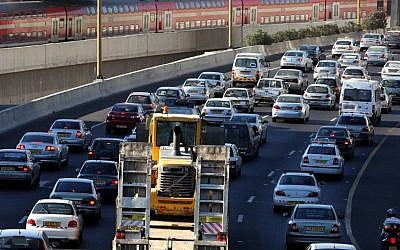 When completed, the tram and metro network will cover the entire Tel Aviv metropolitan area with 240 kilometers (149 miles) of tracks and hundreds of stations, connecting Ra’anana and Kfar Saba in the north of the city, to Rishon Lezion and Rehovot to its south, as well as Lod, Ramle, Ben Gurion Airport and everywhere in between.

The planned six lines are expected to be completed over the next decade at a cost of NIS 18 billion and more. It is the largest infrastructure project ever carried out in Israel.