NEW YORK – When Sharona Shnayder picks up litter on the streets, she likes to think that she is also collecting shards of hope.

At 21, Shnayder is the co-founder and CEO of Tuesdays for Trash, a local nonprofit with operations in 23 countries that encourages people to come together every week to clean up public spaces from thrown trash. Among those countries is Israel, where she recently immigrated from Oregon.

â€œPicking up the trash is therapeutic and makes a tangible difference,â€ Shnayder said. â€œIt’s easy to focus on the sadness and gloom of climate change, but instead of dwelling on that sadness and fear, you can use it to fuel hope. I see garbage collection as a gateway to activism. It motivates you to want to do more.

While picking up trash does not directly chill the planet, Shnayder envisions participants being inspired to become more involved in environmental activism, from supporting candidates pushing for laws that can mitigate and reverse climate change or put pressure on companies to adopt more sustainable practices. Since the United Nations released a climate change report describing the world as being in a “code red” situation, the work seems more urgent than ever, Shnayder said.

â€œWe are grappling with storms, forest fires and drought. This report is not only a red flag, it is an alarm. We are in a global emergency, our house is on fire. We can’t turn it all around, but we can at least mitigate the consequences, â€she said, speaking to The Times of Israel by phone.

Aside from the occasional tree planting or removal of invasive species in high school, Shnayder only really got involved in the environment after watching Swedish climate activist Greta Thunberg speak to the UN in 2018.

â€œWatching kind of solidified what I wanted to do. I started looking for more and more information and I was terrified, â€she said.

However, instead of simmering, Shnayder stepped up.

She volunteered for the Oregon Environmental Protection Agency and lobbied members of Congress to pass climate legislation. She also began organizing programs at Portland State University where she majored in accounting.

Then came COVID-19 and in early May 2020 she, like much of the nation, was on lockdown.

Never one to sit still, Shnayder wanted to do something – preferably outside, and preferably something that could make a difference. So she and her friend Wanda McNealy put on masks and gloves and started picking up the trash. A crumpled bag of crisps here. An empty soda bottle over there. With the bags full, they decided to start over – and again. Before long, they had launched Tuesdays for Trash.

Born and raised in Lagos, Nigeria, Shnayder moved to Tualatin, Oregon with her Israeli father at the age of 8, while her Nigerian mother stayed at home in Lagos. 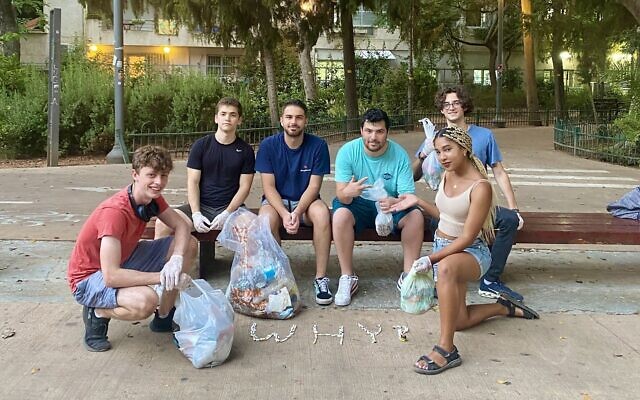 â€œI was excited to move. We watched American television and movies. It looked like a fairytale life. It was different, however, when we came, â€she said.

For the first time, Shnayder faced racism, xenophobia and anti-Semitism.

â€œIn elementary school, I learned the N word for the first time from one of my classmates. By the time I was in middle and high school, I was straightening my hair everyday and had completely given up on my Nigerian accent just so I could fit in with all of my white peers, â€she said. “But not only was being a person of color made me stand out, I was also an immigrant, which was especially difficult during the Trump administration.”

Additionally, she said, the rise of anti-Semitism – from overturned Jewish tombstones to shootings in synagogues, as well as the recent wave of prejudice against Israelis and Jews resulting from the Gaza conflict in May – has weighed heavily on her.

â€œIt has become almost a leftist ideology to hate Israel, which puts someone like me living in America and planning to move to Israel in an incredibly awkward position. Sometimes I was really scared that people would find out that I am Jewish and cancel me for my identity and my heritage, â€she said. 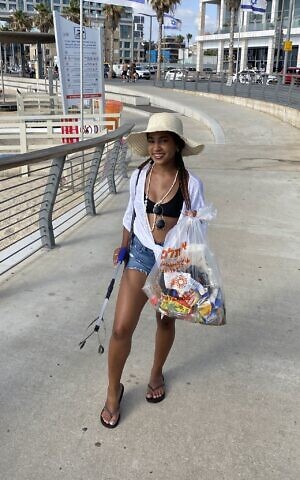 Sharona Shnayder picking up trash at a Tel Aviv beach in this undated photo. (Courtesy)

Growing up too far from a synagogue to attend services or Hebrew school, Shnayder only began to explore his Jewish roots after he began his studies at Portland State University. It was then that she became involved in the school chapter of the Union of Jewish Students.

Last year, she visited Israel for the first time with the Masa Israel Journey program. She worked as a marketing and campaign intern for UBQ Materials to promote recycling and waste management. Masa was one of the only organizations capable of providing opportunities for young people in Israel during COVID.

While in Israel, Shnayder also started an Israeli chapter of Tuesdays for Trash. She has organized cleanups all over Tel Aviv, including the Carmel open-air market, the beach, and various parks. The most recent took place in the Neve Tzedek neighborhood of Tel Aviv on September 14.

Shnayder said she found the country so welcoming and the people so supportive and friendly that she decided to immigrate. Earlier this month, she moved into her new apartment in Ramat Gan, a city in central Israel directly adjacent to Tel Aviv, and enrolled in a Hebrew immersion program.

Aside from Garbage Tuesdays, Shnayder is busy organizing the Third Race for the Planet, a global fundraiser for cleanup. Yerba Mate, Patagonia, Insta360 and Dirtbag Runners are among its corporate sponsors. 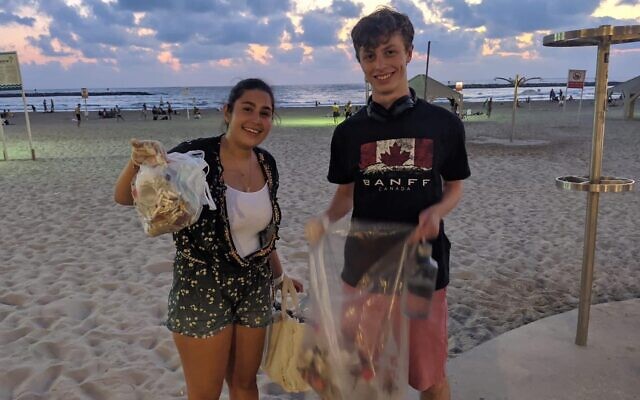 Sharona Shnayder picking up trash at a Tel Aviv beach with a fellow volunteer in this undated photo. (Courtesy)

Shnayder also cited Israel’s global leadership in technology, agriculture and the environment as a factor in his decision to immigrate. She plans to pursue a career in waste management, with a focus on tackling the climate crisis. She is particularly interested in microplastics, which, at less than five millimeters in length, pose a particular danger to marine life and to her favorite marine animal: the turtle.

In view of a job with the Israeli Ministry of Environmental Protection, Shnayder said she was eager to continue her popular activism.

â€œCommunity organization is part of the legacy I want to leave,â€ she said.

It’s a legacy she attributes to her early childhood in Nigeria.

â€œLiving there taught me what I call survival and sustainability skills,â€ she said. â€œI learned that resources are limited, that you have to do things that last and keep things for a long time. That it is vital to keep our environment clean and safe.