Russian-Israeli billionaire businessman Leonid Nevzlin, who earlier this month announced he was renouncing his Russian citizenship, called President Vladimir Putin a “psychopath” during a Channel 12 interview on Friday .

Nevzlin, who knew Putin before he left the former Soviet Union, said he was embarrassed to be Russian as Moscow’s invasion of Ukraine continues.

He called on the world to maintain an aggressive stance against Putin, who he said currently feels like a “cornered rat”.

Nevzlin quoted a biography of Putin in which he is quoted as saying of himself: “Don’t push the rat into a corner, he is likely to attack and bite.”

“You ask, how is that relevant? Because he feels like a cornered rat. And why? Because he’s a psychopath. He pushed himself into the corner,” Nevzlin said.

Nevzlin said Putin had a serious inferiority complex, suggesting it was because he was short. “I’m sorry, I don’t mean to offend anyone but I see a lot of these ‘Napoleons’ in life.”

He also called Putin a “war criminal”, adding that although he considered him a psychopath, he was still rational and wanted to live. “He’s just not smart.”

“Putin is undoubtedly a war criminal,” Nevzlin said. “His folly will not hide it.”

“Again, he’s a psychopath, but he won’t just have to live with this diagnosis, he has to sit in the defendant’s dock in war crimes court,” he said.

He also said Russia’s apparent failures in the war were due to Putin’s lack of “strategic thinking”.

“He got involved in a long story and doesn’t know how to get out of it anymore,” Nevzlin said.

He praised Israel’s efforts to mediate between Russia and Ukraine and said Israel had a real “advantage” thanks to its international position.

Nevzlin is a longtime critic of Putin and was forced to flee Russia. 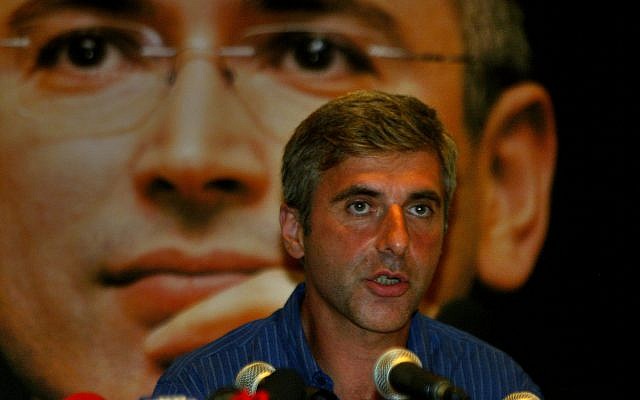 Leonid Nevzlin, the exiled partner of Russian oil tycoon Mikhail Khodorkovsky, pictured in the background, speaks during a news conference, at a hotel in Tel Aviv, Israel, Tuesday, May 31, 2005. (AP Photo/ Brennan Linsley)

Nevzlin was the most prominent of the executive oil associates of Mikhail Khodorkovsky who fled Russian arrest warrants in 2003. Khodorkovsky, the former head of oil giant Yukos, was jailed for several years after clashing with Putin.

Nevzlin was convicted, in absentia, of multiple counts of conspiracy to commit murder and sentenced to life behind bars. In 2014, the Permanent Court of Arbitration ruled in favor of Nevzlin accusing Moscow of waging “a ruthless campaign to destroy [him] and to expropriate [his] assets.”

In the years that followed, Nevzlin established himself as an influential businessman and philanthropist. He was president of the Russian Jewish Congress, became chairman of the board of trustees of Beit Hatfutsot – the Museum of the Jewish People – and is a member of several bodies of the Jewish Agency, the Jewish National Fund, the Hebrew University and from Tel Aviv University. . He also owns 25% of the Israeli newspaper Haaretz.

His daughter Irina is married to Yuli Edelstein, a senior Likud party politician and former political prisoner in the Soviet Union.