BETHLEEM, West Bank – The last time Milad Ayyad traveled outside the Gaza Strip he was only 10 years old, but for Christmas this year he received a “priceless” gift to visit Bethlehem.

On Christmas Eve, Israeli authorities gave Ayyad, who is now 30, a blue slip allowing him to visit the biblical birthplace of Jesus Christ.

“It is a great joy to [finally] get a permit, “Ayyad told AFP, adding that he had tried for years to get one to no avail.

â€œI had been hoping to go to Bethlehem for a long time now to celebrate [Christmas] with my relatives whom I have not seen for years.

He is one of 500 Hamas-led Gaza Christians who have been allowed by Israeli authorities to travel to the West Bank for the holidays this year.

The permit to leave the impoverished Gaza Strip, which has been blocked by Israel and partially by Egypt for 15 years, arrived too late for him to organize to be there on Christmas Day.

Israel says the blockade is necessary to prevent terrorist groups dedicated to its destruction from arming massively to attack.

Like most Christian Gazans, Ayyad is a Greek Orthodox who typically marks Christmas Day on January 7, which means he can always expect more holiday cheer.

â€œThe celebrations in the city of peace, Bethlehem, are special,â€ said Ayyad, a history student whose first name means â€œbirthâ€.

â€œThey cannot be compared to those in Gaza, which only take place behind church walls with just a mass. “

Unlike war-ravaged Gaza, he said, Bethlehem is full of “joy … even its streets have more spirit than Gaza.”

The number of Christians in Gaza has been declining for years, many of them emigrating, especially after Hamas took power in 2007.

According to local church officials, only around 1,000 Christians remain in the enclave, up from 7,000 before 2007.

Milad Ayyad, a Palestinian Greek Orthodox Christian from Gaza, touches the icon of the Madonna and Child for a blessing at the Greek Basilica of the Church of the Nativity, the traditional place of Christ’s birth, in the Biblical City from Bethlehem in the West Bank on December 26, 2021 (Hazem Bader / AFP)

Until the last minute, Ayyad’s trip seemed fraught with pitfalls.

For starters, Israeli authorities had not indicated when the permit would be issued, leaving matters uncertain. He then had to call his uncle to make sure he was ready to receive him at his home in Beit Sahur, a town near Bethlehem.

This was followed by the organization of his trip to the Erez crossing point to Israel.

But by far his biggest challenge was convincing his father, Suhail Ayyad, that he would be able to make the trip on his own.

“I care about my sons like the apple of my eye,” said the father, who suffers from a serious illness and is afraid of Israel due to the many years of cross-border violence.

In the yard of their home in Gaza, where an unreliable supply of electricity makes their Christmas tree lights flicker irregularly, it took a collective effort to convince Ayyad’s father that the trip was safe.

Even a talkative neighbor intervened, insisting that as long as Ayyad had a permit, there was no risk. 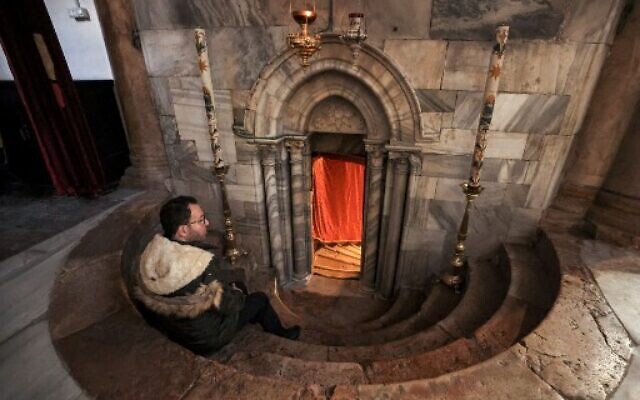 Milad Ayyad, a Palestinian Greek Orthodox Christian from Gaza, sits outside the cave of the Church of the Nativity, the traditional birthplace of Christ, in the biblical city of Bethlehem in the West Bank, December 26, 2021 (Hazem Bader / AFP)

On the day of the big departure, the young man, who could not remember ever seeing an Israeli, scanned the signs pointing the way to Israeli towns.

Dressed in a thick coat to protect himself from the “cold of Bethlehem,” he gazed in awe at the greenery, noting that “there are no forests like these in Gaza.”

The number of Christians gathered in Manger Square undoubtedly far exceeded those in all of Gaza.

Ayyad took a selfie in front of the giant Christmas tree, visited the Church of the Nativity, lit a candle, and knelt in front of the cave where Jesus Christ is said to be born.

His trip to Bethlehem marked a brief relief from his life in crisis-stricken Gaza.

The impoverished coastal enclave is still emerging from the effects of the war between Hamas and Israel seven months ago, of which “we are still crying,” Ayyad said.

According to Janine di Giovanni, a researcher at Yale University, Christians in Gaza “should have the freedom to go where they want to worship.” 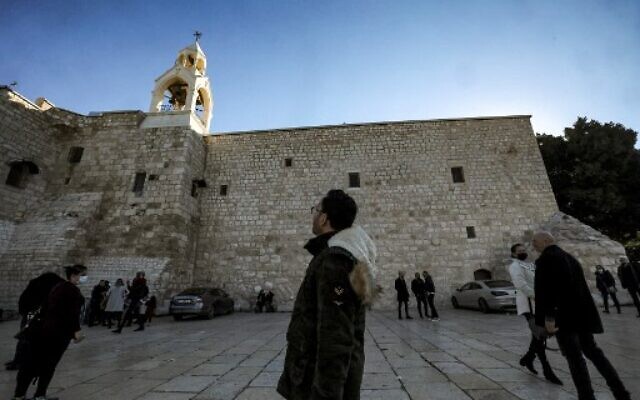 Milad Ayyad, a Palestinian Greek Orthodox Christian from Gaza, stands in the Manger Square in front of the Church of the Nativity, the traditional birthplace of Christ, in the biblical city of Bethlehem in the West Bank, December 26, 2021. (Hazem Bader / AFP)

The restrictions on their movement constitute an “absolute affront to religious freedom,” said di Giovanni, who recently wrote the book “The Vanishing: Faith, Loss, and the Twilight of Christianism in the Land of the Prophets”.

Israel says the limitations are necessary for security reasons. Some entrants to Israel have used their permits to aid terrorist organizations. He also used restrictions in his carrot and stick tactics with Hamas.

But Ayyad is nonetheless delighted to have tasted freedom this Christmas.

Although he had not flown or suffered the jet lag, his journey from one Palestinian territory to another made him feel like he had “traveled from country to country”.