The Palestine Liberation Organization is due to convene in Ramallah on Sunday in a meeting that some see as a boost to a possible successor to longtime Palestinian Authority President Mahmoud Abbas.

“There is an impasse in the political process with Israel, a difficult position vis-à-vis the Arab world – Palestinian leaders will meet to decide their approach in light of these circumstances,” said senior Palestinian official Tawfiq. al-Tirawi, who is due to attend Sunday’s rally.

For the first time since 2018, the PLO’s Central Council will meet to hold key leadership positions in the pan-Palestinian organization. But most of the Palestinian political spectrum will not attend, and some major factions have announced their intention to boycott the rally.

The most important vacancy is a seat on the PLO’s executive committee – the group’s highest decision-making body – formerly held by the late PLO negotiator Saeb Erekat. Alternately admired and vilified by his Israeli counterparts, Erekat died of COVID in late 2020.

Erekat’s place is expected to be taken by Hussein al-Sheikh, once one of Abbas’s closest advisers. A longtime member of the ruling Fatah party, al-Sheikh is seen as one of several contenders to succeed 86-year-old Abbas.

Al-Sheikh heads the PA office that handles relations with Israel, making him one of the most powerful Palestinian officials in the West Bank. He meets frequently with Israeli officials and foreign diplomats, and met one-on-one with Foreign Minister Yair Lapid last week.

Al-Sheikh is widely seen as likely to also take on Erekat’s role as chief PLO negotiator. Formally taking over Erekat’s top job would likely boost his chances in the turbulent succession contest.

According to al-Tirawi, al-Sheikh will likely be elevated to the prized post of chief negotiator at the next meeting of the Executive Committee to distribute the portfolios among its members.

“Al-Sheikh was appointed to the [Executive Committee] so that he can receive the portfolio of negotiations,” said al-Tirawi, a member of Fatah’s Central Committee.

Several other positions remain up for grabs at Sunday’s meeting. Hanan Ashrawi, a former PLO spokesperson and member of the executive committee, retired in 2020, leaving an empty seat. No clear candidate for his place has yet emerged.

Abbas, 86, who is also chairman of the PLO, presides over a largely unpopular regime that critics have deemed increasingly autocratic. Abbas has approval ratings at rock bottom; although his term ended in 2009, he continued to rule by executive order.

As the aging Abbas struggled with ill health, he did not name a clear successor. Many candidates are seen as vying for the post, including al-Sheikh, exiled security chief Mohammad Dahlan, and Marwan Barghouti, a convicted terrorist serving multiple life sentences in an Israeli prison.

“Some people act as if succession could be determined by behind-the-scenes deals made by a few individuals, whether within Fatah or the PLO. It’s crazy talk. In the end, the only path to legitimacy is through elections,” said Nasser al-Kidwa, a former senior Palestinian official turned critic of Abbas. 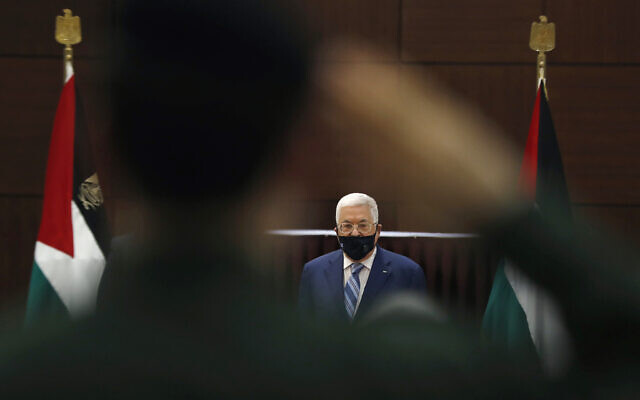 Palestinian Authority President Mahmoud Abbas gestures during a meeting with Palestinian leaders to discuss the United Arab Emirates’ agreement with Israel to normalize relations, in the West Bank city of Ramallah on August 18 2020. (Mohamad Torokman/Pool via AP)

But Palestinian national elections have not been held for more than 15 years. The terrorist group Hamas won the 2006 Palestinian legislative elections. After a year and a half of tense power-sharing, the government collapsed in a bloody civil war between Hamas and Fatah in 2007.

Many promises by Abbas and other Palestinian leaders to hold another round of voting have yet to be fulfilled. Abbas signed a decree last January to hold elections, only to postpone them again indefinitely in late April, fearing loss to rivals in Fatah and Hamas.

Most opponents of Abbas will not attend Sunday’s meeting, including terror groups Hamas and Islamic Jihad. Two prominent factions within the PLO, the Popular Front for the Liberation of Palestine terror group and the National Initiative, will also boycott the rally.

The decision to convene the committee also drew criticism from Abbas’ own Fatah movement. A former Fatah official said the agenda for the meeting – which appeared to focus mainly on nominations – showed a divide between the leadership and the concerns of most Palestinians.

“The Palestinian people don’t care if the Executive Committee has 15 members or 11 or whatever. There are other issues that need solutions: Jerusalem, settlements, prisoners, dealing with the occupation,” said the official, who requested anonymity in order to speak candidly.

“If this meeting isn’t going to give us even a tiny fraction of unity, it’s a step in the wrong direction,” the official added.