israeli architecture studio paritzki & liani turned to Japanese Zen gardens and sacred spaces to design this family lodging in the neve tzedek district of Tel Aviv. Called â€œeucalyptus house,â€ the residential project takes its name from an old tree on the elevation facing the street that shaped the design.

when approaching the design, paritzki & liani considered the existing tree to be a â€œhimorogiâ€, a sacred space or altar which literally translates as â€œdivine enclosureâ€. with this in mind, the architects inserted a space in the front elevation to make space for the roots and branches of the tree.

‘as in an enclosed holy place, typical of Japanese Zen gardens, the ancient eucalyptus creates a ritual space, around which the facade and the entire arrangement of the volumes have been designed,’ explain the architects.

the elevation treatment also features perforated metal, allowing a glimpse of the interior of the house. the entrance is marked by the door made of burnt black yaki-sugi wood, a traditional Japanese method of preserving wood by burning it. this material is also partially used inside. 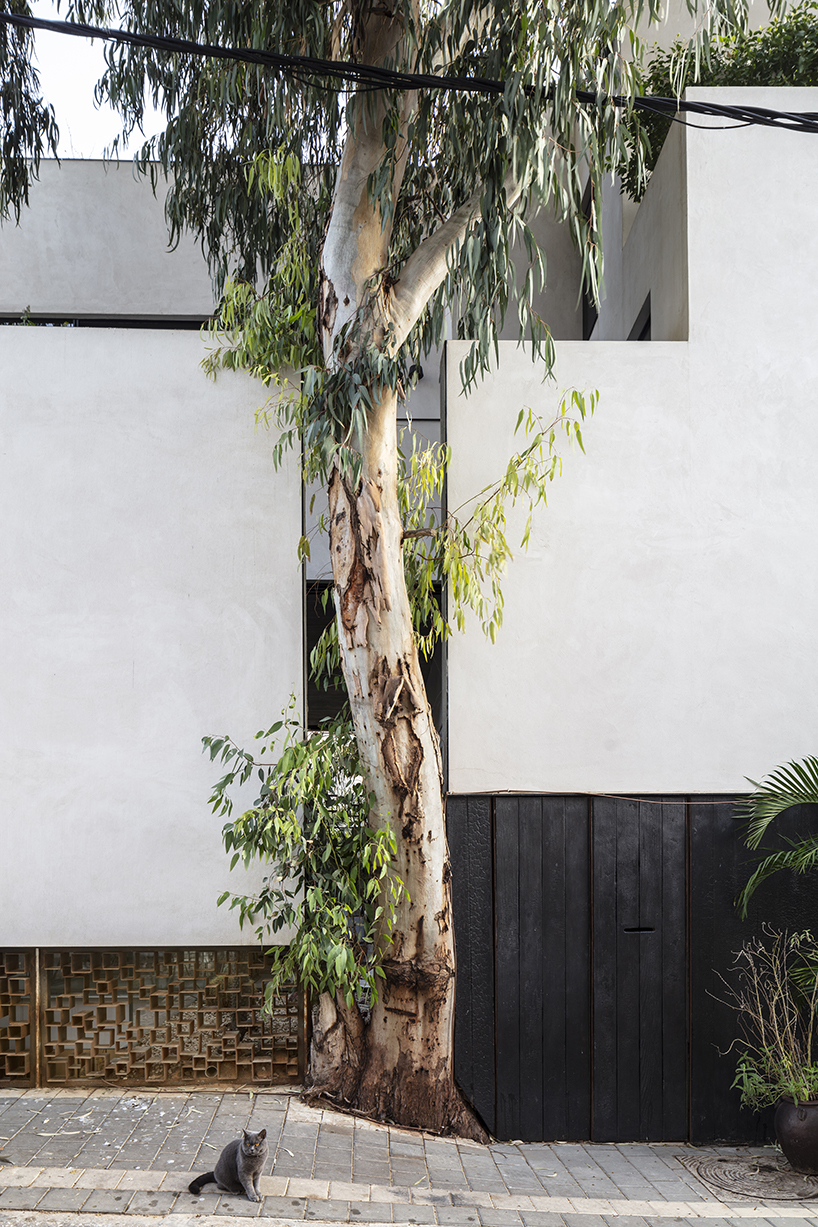 a space in the facade provides space for the existing tree

The idea of â€‹â€‹paritzki & liani was to create a house of four misaligned levels. the architects created two sections, divided vertically into two and three floors; a raumplan which allows, with a height difference of only 0.50 m, to keep private rooms separate from the core of the house.

following this idea, the living room, located between the two patios on the ground floor, has a double height of 4 m. it is conceived as a place of intimacy and domestic sharing and at the same time, it contains the most public space of the house. a wooded patio, placed between the interior of the house and the street, creates depth between the sections and improves natural ventilation. 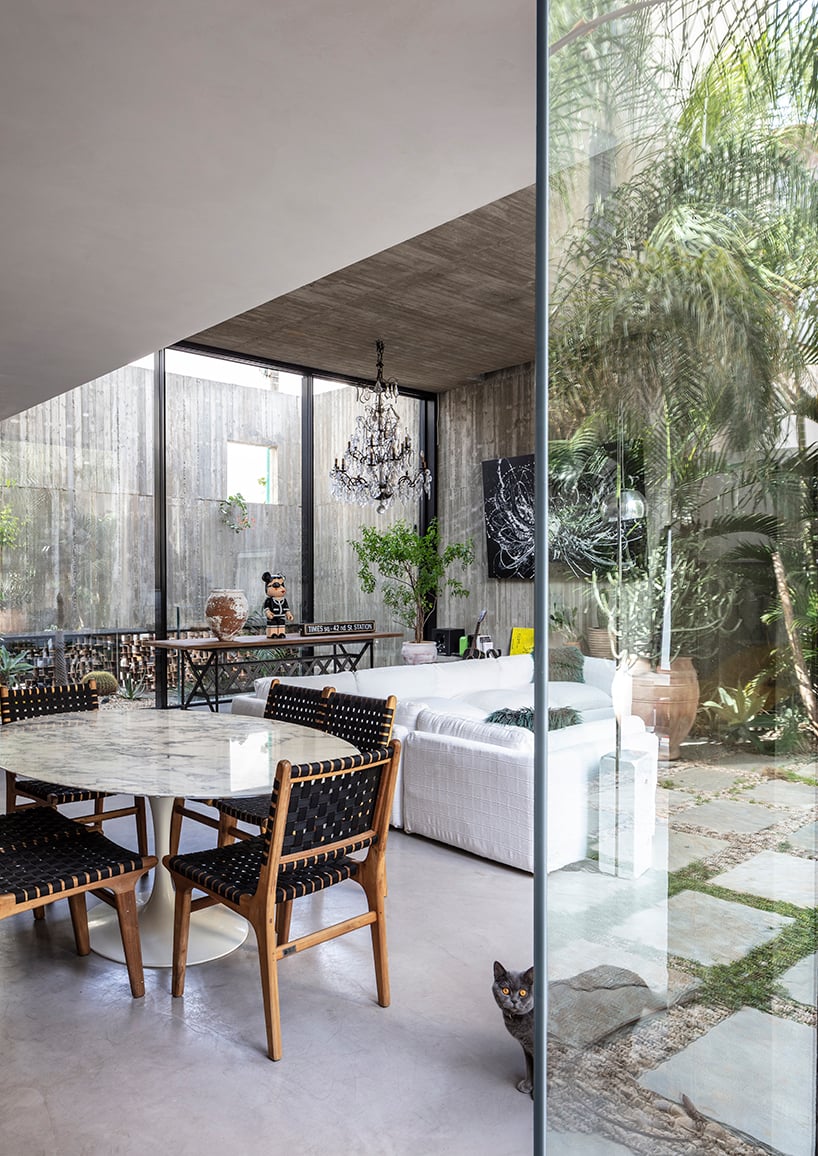 from the entrance it is possible to go down to the lower floor, where the independent apartments of the two sons are located in the basement. this area faces a small courtyard visually connected to the upper tree-lined patio.

the volume of the small office and the private rooms of the other two sons has been inserted with that of the living room on the two upper planes. these rooms have been designed as independent units and are located on different levels in order to preserve the privacy of the inhabitants. this height difference continues up to the roof / terrace, where the parents’ private apartment is located, as well as the roof garden and swimming pool. 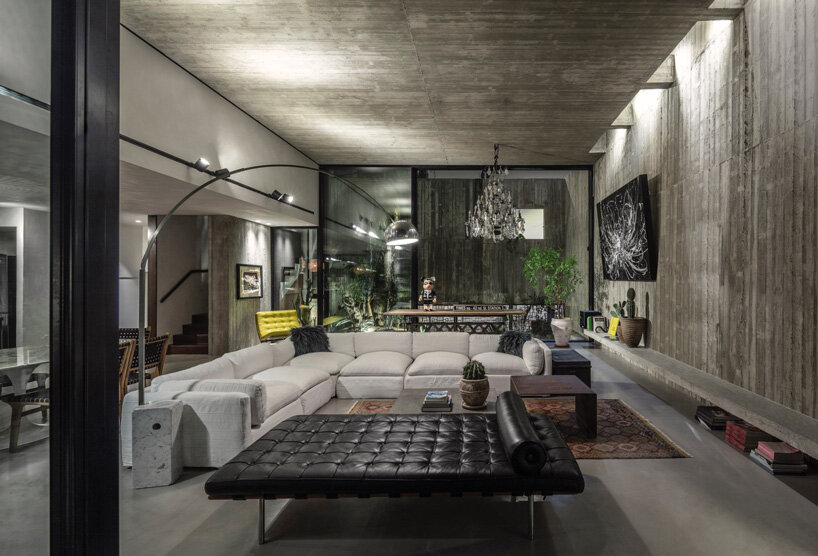 the internal joints and the meeting points of the different volumes are characterized by light cuts that cross the two parts of the house. the independent patterns of the paths that intertwine inside the house and connect with the flying branches and the wooden trunk of the eucalyptus, create a constant visual line between the green of the ground floor and the light of the upper floors. this allows the four sons and the parents to develop their own artistic activities independently and privately inside the house.