A high-level committee of officials set up within the prime minister’s office on Monday presented its final recommendations on the future of Haifa Bay in northern Israel, with a call to stop all petrochemical activity by now. a decade, at most, to allow the creation of new housing, green jobs and a park.

The schedule is conditional on “maintaining the minimum needs of the energy industry”.

Environmental Protection Minister Gila Gamliel, who has gone to great lengths to shut down polluting industries, praised the report, saying the people of Haifa deserve a “green and innovative bay.”

But a sign of the difficulties ahead, the finance ministry expressed its reservations in a report while the energy ministry sided with the Bazan petrochemical complex, owned by the Israeli company of the Ofer family. Both attacked the committee for what they called unprofessional work.

The committee was created within the framework of government resolution 472 of October 25, 2020. Chaired by Avi Simhon, head of the National Economic Council in the Prime Minister’s Office, it comprises: the directors general of the PMO; the ministries of environmental protection, energy, economy and industry, interior and defense; Head of the Budget Department of the Ministry of Finance; the heads of the National Security Council, the National Economic Council, the Israel Land Authority and the National Planning Council; and the Attorney General.

It was not immediately clear whether representatives of the finance and energy ministries on the committee objected to the report themselves.

The 85-page report (in Hebrew), filled with diagrams and graphs, notes that the bay, which is home to heavy industry, has great potential for development thanks to the presence of high-tech industries in the area, the proximity major higher education institutions such as the Technion – the Israel Institute of Technology, the University of Haifa and several hospitals, as well as transportation connectivity and a diverse population.

Plans for a new ‘innovation bay’ in the northern city of Haifa after the polluting oil refinery industry withdraws, June 29, 2020 (Screen capture, Committee on Home Affairs and Environment of the Knesset)

As in his draft report released for public comment in April, he notes the stagnation experienced by Haifa – Israel’s third largest city – in general and the Bay Area in particular over the past decades, the abnormal amounts of carcinogenic benzene and other chemicals in the air, and the excessive levels of cancer observed near the industrial area. In addition, he cites the fact that the Bazan Group has been at the top of the list of factories with the most negative environmental impact in Israel for years, having repeatedly violated permits and emission licenses – 150 times between 2017. and 2019 only. He also highlighted the location of the bay on an active seismic fault.

Calling on the government to start talks with Bazan to examine the possibility of moving to cleaner types of industry, the report says the committee found alternative solutions that could be implemented over the next decade to provide to the Israeli economy of fuel distillates, liquefied petroleum gas, bitumen and condensate.

He also urged making a deal with the Jewish National Fund KKL-JNF to finance and develop a metropolitan park.

The energy and finance ministries challenged the committee’s views on the Haifa region’s stagnation, saying the report was unbalanced. 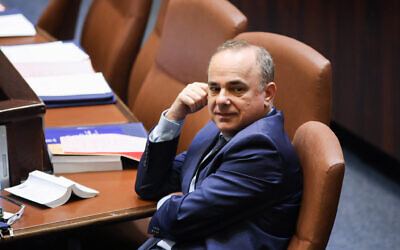 Israeli Energy Minister Yuval Steinitz during a discussion on a bill to dissolve parliament at the Knesset in Jerusalem on May 29, 2019 (Hadas Parush / Flash90)

The Energy Ministry said the petrochemical industry’s contribution to pollution was “very small”, at 10 percent, compared to other sources of pollution such as shipping and road transport. He criticized the use of cancer statistics from the past as the basis for future predictions and said it would be more polluting to import benzene than to let local production of a lighter version continue. Together with the Ministry of Finance, the Ministry of Energy described an opinion poll carried out as part of the committee’s work to disadvantage Bazan. 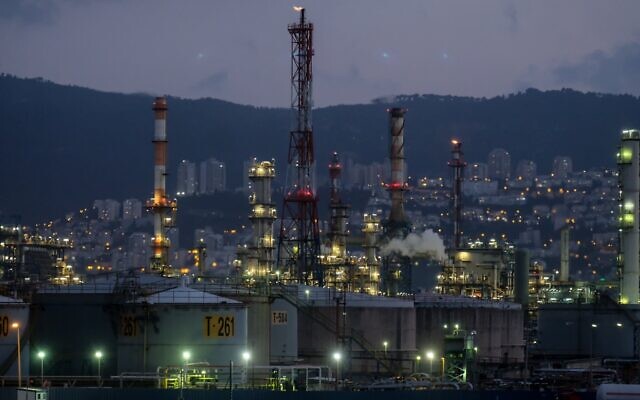 Denying opposing the development of Haifa Bay, the finance ministry has expressed support for the final closure of the petrochemical industry. But he said a 10-year timeline was economically or planning unrealistic, recommending instead a slower, more thoughtful approach, with no deadline at this point.

He called for the creation of a smaller committee that, by the end of 2023, would set a deadline for shutting down petrochemical industries. The deadline would leave time to plan for alternative energy infrastructure and to design an economically worthwhile financial framework. The shutdown would only take place when the country’s need for refining no longer justifies the massive infrastructure that exists in the bay, the ministry wrote.

Over the next two years, Bazan would not be helped to develop and would be invited to government negotiations on compensation. The storage of imported fuels would also be better explored.

In the shorter term, the Treasury recommended relocating the Bazan oil storage complex – which is close to the houses of Kiryat Haim nearby – to the Bazan site in the bay, relocating a bay fertilizer factory owned by at Haifa Chemicals and relocate an existing flight school to open up the waterfront to the public.

The Bazen Group said in its response that â€œthe recommendations issued by the Prime Minister’s Advisor contradict the professional position of government ministries, including economists in the Ministry of Finance and heads of the Ministry of Energy. 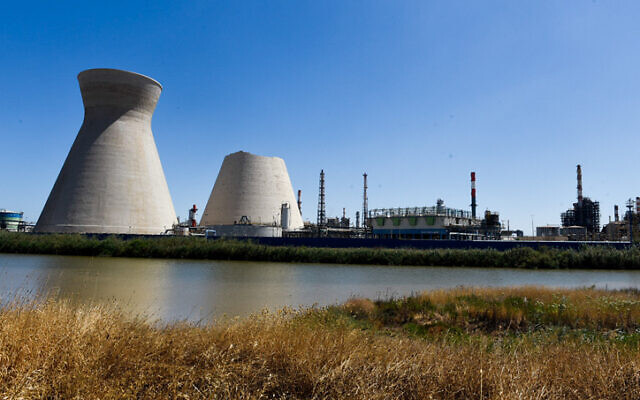 View of the water cooling towers of the Haifa oil refinery on June 12, 2020, after one of them collapsed (Meir Vaknin / Flash90)

“The prime minister’s adviser’s attempt to issue recommendations at present that are not acceptable to the professional level raises serious questions about ulterior motives,” the company said.

He asserted that the target of shutting down petrochemical industries appeared to have been “marked from the start, unrelated to figures, facts or the situation on the ground”, accusing the rejection of requests to discuss other options to develop. the Bay.

Bazan called on whatever government formed to hold a “professional” discussion “based on facts and data, not slogans,” while taking into account property rights and contracts signed by the government, and ensuring the continuous and uninterrupted operation of energy. sector.