A Jewish mob dragged an Arab driver out of his car and beat him with glass bottles before fleeing the scene in Binyamina town on Thursday evening, witnesses said.

The driver was rushed to Rambam Medical Center in Haifa in moderate condition where he was being treated for head injuries.

Witnesses told the Walla news site that a dozen men wearing black shirts, some with kippahs, surrounded the victim’s vehicle, forcing him to stop at Heroes Junction in the north. from the city. They then smashed his windows, pulled the driver out of the car and repeatedly hit him, including with glass bottles, as he lay helpless in the street.

The Black Shirts have long been affiliated with the extremist group La Familia of football fans from Beitar Jerusalem, which are periodically involved in attacks on Arabs and leftist protesters.

A witness mentionned he stopped at the crossroads at the end of the assault. “I saw them beating someone on the ground, then they immediately got in their car and ran away,” he told Walla, adding that he called the police who were investigating the incident as an aggression with nationalist motivation.

Doctors from Magen David Adom treated the victim at the scene, placed her on a stretcher and took her to hospital in an ambulance.

Also Thursday, suspects threw Molotov cocktails at the home of a Jewish family in the mixed town of Lod. Residents of the house managed to quickly put out the fire before anyone was injured, the Ynet news site reported.

Since the 11-day war between Israel and terror groups in Gaza began earlier this month, violence has erupted in so-called mixed towns, with Arab and Jewish crowds targeting often defenseless passers-by, choosing them based on their ethnicity.

Thursday’s incident was the second Jewish mob assault on Arabs in Binyamina this month.

On May 12, a crowd of hundreds of people wielding clubs, knives and Israeli flags arrived at a gas station at the entrance to the city.

“They vandalized the station and set off fireworks as they looked for Arab passers-by to attack,” one of the co-owners of the Shoshana Stavy gas station recalled in an interview with Radio 103 FM on Thursday.

â€œOne of them shouted ‘Here is an Arab!’ and everyone ran to beat him. And then someone else shouted “A leftist!” so everyone went after whoever they decided to be on the left, â€she said.

Footage from the scene showed two Arab workers at nearby Jisr a-Zarqa gas stations lying on the ground as several Good Samaritans stood in front of them, trying to fend off the Jewish crowd, also wearing black shirts.

â€œThe police arrived after the beatings started and eventually rescued the victims, but did nothing to stop the riot,â€ Stavy said.

â€œIt was complete anarchy. People were walking around with sticks and stones, â€she said, adding that the incident lasted nearly four hours.

Stavy told 103 FM she saw a small number of rioters arrested but was skeptical whether any of them would be charged. The owner of the gas station said it took a week and a half before officers came to collect footage from the security camera.

Police launched Operation Law and Order on Monday and have since arrested more than 350 people suspected of being involved in the violent clashes between Jews and Arabs earlier this month.

So far, 175 indictments have been filed, Police Commissioner Kobi Shabtai said on Thursday, adding that the operation would continue in the coming days. 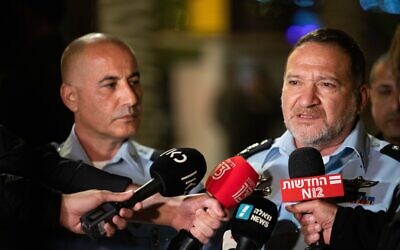 Police Commissioner Kobi Shabtai, right, meets with the press near the Damascus Gate in Jerusalem on April 24, 2021 (Yonatan Sindel / Flash90)

Nearly 2,000 suspects have been arrested since the war in Gaza broke out on May 10, police said.

A police spokesperson told the New York Times on Monday after the first day of the operation that 70% of those arrested were Arabs and 30% Jewish.

The charges included assaulting police officers in aggravated circumstances, endangering human life on a public highway, participating in riots, throwing stones, disorderly conduct in a public place, arson and interference with a police officer in the performance of his duties.

The campaign saw officers “deploy widely against rioters, criminals and anyone involved in the peace disturbances to bring them to justice,” police said.

Ynet reported that the aim of the operation was also to “settle scores” with criminal gangs operating in Arab communities. The operation was approved after consultation between Public Security Minister Amir Ohana and Shabtai. 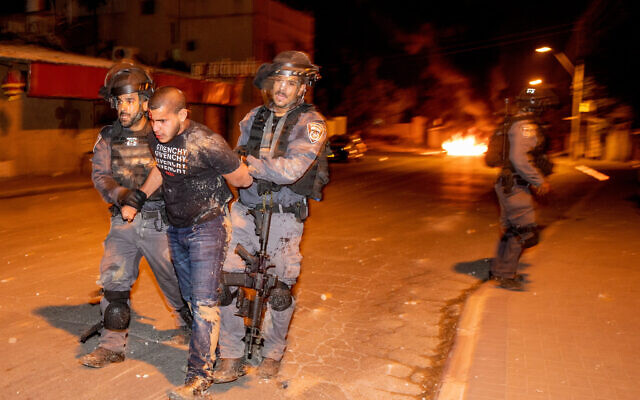 On Monday, heads of Arab municipalities met with Shabtai and complained that the police were only taking action against violent crimes in the Arab community because they had become a threat to the Jewish community, Haaretz reported.

“All of a sudden the police are now waking up and wanting to launch an operation for law and order,” Touma-Silman said, according to Haaretz. â€œWhere were they when crime was rampant in the Arab community? It seems that when it comes to saving Arab lives, the police do not budge.

Also on Monday, three Jews were charged with terrorism over an attack on an Arab man in the coastal town of Bat Yam earlier this month, which was broadcast live on television.