Haredi Chief Rabbi: Lapid and Liberman are traitors to their people, worse than Nazis

A Haredi chief rabbi on Saturday accused top ministers of “betraying their people” and called them “worse than the Nazis.”

Giving a weekly lesson to his students, Rabbi Meir Mazuz of Yeshiva Kisse Rahamim in Bnei Brak was seen on video saying the government seeks to “stifle Torah students” while “giving as much as possible to Arabs.”

“We have bad people. We were waiting for them to leave this world,” Mazuz said, mentioning Foreign Minister Yair Lapid and Finance Minister Avigdor Liberman along with “all their friends.”

Mazuz is an influential Sephardi rabbi and has ties to the Shas leadership. He was the spiritual leader of former Shas leader Eli Yishai’s Yachad party.

The rabbi has been at the center of controversy in the past.

In 2020, Mazuz was condemned when he said the arrival of the coronavirus pandemic in Israel was divine retribution for gay pride parades around the world. In 2016, he attributed a Tel Aviv parking lot collapse that killed six people to Shabbat desecration.

Israeli leaders have warned of growing hatred, division and incitement in society, especially since the formation of the current coalition of disparate left, right and center parties.

This month, a right-wing activist was charged with sending threatening letters containing bullets to Prime Minister Naftali Bennett and his family.

Lapid said he also received threats, including a message wishing he would die of cancer and comparing him to Nazi leader Adolf Hitler.

In January, a man was indicted for threatening Religious Affairs Minister Matan Kahana to meet the same fate as slain Prime Minister Yitzhak Rabin, over his plans for state and religious reform, weakening the ultra-Orthodox hegemony on various issues. 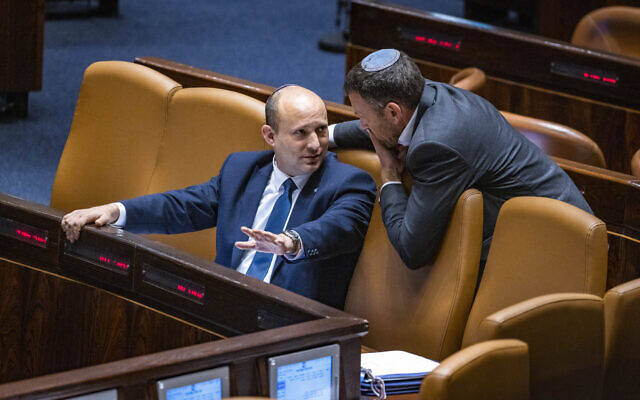 The formation of the unity government last year left the Haredi Judaism United Torah and Shas parties out of power for the first time in years. The parties have since attacked secularists Liberman and Lapid, accusing them of acting out of hatred for their constituents.

Ministers insist they have no animosity toward the ultra-Orthodox population, but seek to end various social benefits that privilege Haredim over other groups.

With the future of the coalition hanging in the balance, Channel 12 reported last week that Liberman was planning a wave of further economic cuts and measures that would target the ultra-Orthodox community.

The report claims that Liberman is seeking to advance three new measures: cut the budget for yeshiva studies by a third – from 1.2 billion shekels ($360 million) to 800 million shekels ($240 million) ; funding the Haredi private school system at 75% versus 100%; and allocating benefits such as childcare subsidies, housing assistance and arnona (property tax) reductions only to those earning a certain level of income, excluding those studying full time.

Of note is the alleged attempt to intervene in child care subsidies, an issue that Yamina MK Nir Orbach has explicitly demanded remain intact as part of an ultimatum for him to remain in the falling coalition.

Initially, Liberman had pushed a plan under which, from 2023, childcare subsidies would only be granted if parents worked at least 24 hours a week. The move would have effectively ended subsidies for some 21,000 children, many of whom come from ultra-Orthodox families in which the father learns at the yeshiva.

But after pressure from Orbach last month, Liberman agreed to push back the plan and make the reduction not take effect until 2024.