The Health Ministry announced on Saturday that the genetic profile of a deceased child born to Yemeni immigrants matched family members, confirming that the baby died of illness and was not kidnapped by the state like the his relatives suspected.

The remains of Yosef Melamed, who was pronounced dead in hospital after suffering an illness nearly 75 years ago, were exhumed in July and were the first of nine bodies to undergo DNA testing by the Israel National Institute of Forensic Medicine in the so- called case of the Yemeni children.

Immigrants arriving from Yemen and other countries in the Middle East and North Africa have claimed for decades that their children and siblings were taken from them as babies and given up for adoption in the 1940s and 1950s after learning that the children had died.

Sharabi said it was “important” that doubt over Melamed’s fate had been cleared, but spoke out about the suffering her 91-year-old mother has endured over the years.

“We still haven’t cried, but today, at night, we will cry. Today we understand that Yossi is dead,” said Ayelet Sharabi, the boy’s niece.

Yosef was born to Shalom and Shulamit Melamed, who arrived in Israel from Yemen in 1943. Shalom fought in the Givati ​​Brigade during the War of Independence and was killed in April 1948 while accompanying a military convoy to Jerusalem.

Shulamit, then 17, took her 1.5-year-old son to Hadassah Medical Center in Tel Aviv later that year after he fell ill. The next morning, hospital staff told her that the baby had died overnight and had been buried in Nahalat Yitzhak Cemetery, to spare her further grief.

Shulamit believed her son to be dead until 1963, when she received a military draft notice for him. After asking the Interior Ministry for an explanation, she received a document stating that her son had “left” the country that year.

She believed for many years that her son had been kidnapped and then adopted and was still alive.

In a statement to Channel 12 news, the Health Ministry pledged to “stand with the families” and continue their efforts to “shed light on the plight of their loved ones and ease their pain.”

A previous attempt to produce DNA profiles from 10 other graves unearthed in connection with the case some 25 years ago, when the science was still relatively new, had not yielded conclusive results.

Technology has now made it possible to identify complete profiles using very limited and often damaged DNA samples, which is usually typical of bodies buried for a very long time. 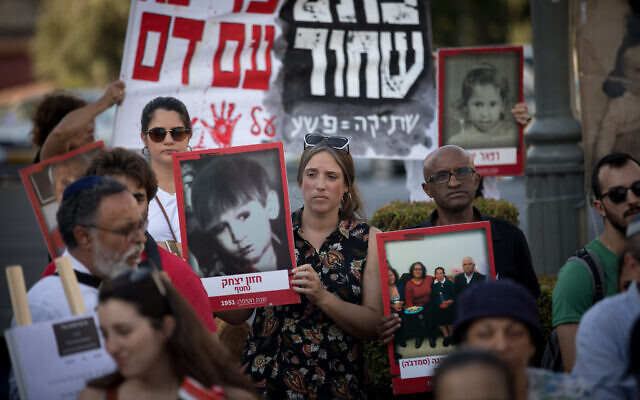 Israelis demonstrate as they mark a day of remembrance and awareness of the Yemeni children’s case in Jerusalem on July 31, 2019. (Yonatan Sindel/Flash90/File)

Over the years, official state investigations have dismissed all allegations of mass abductions staged by medical personnel or officials. Nevertheless, the suspicions persisted and contributed to a long-standing fault line between Jews of European descent and those of Middle Eastern descent.

Three high-level commissions of inquiry dismissed the conspiracy claims and found that most children died of disease in the immigration camps. The most recent investigation, in 2001, indicated that some children may have been handed over for adoption by individual social workers, but not as part of a nationwide conspiracy. However, citing privacy laws, he ordered the testimonies he had collected to remain sealed for 70 years.

The proposal included a statement that “the government of Israel regrets the events that occurred at the beginning of the state and recognizes the suffering of the families whose children were part of this painful problem.”

However, a number of families involved have demanded that the government reveal confidential documents relating to the case, calling the compensation plan “silent money”.