Tel Aviv
Home›Tel Aviv›Barkat says Netanyahu should have stepped down; Mossad’s Cohen soars in the polls

Barkat says Netanyahu should have stepped down; Mossad’s Cohen soars in the polls


Nir Barkat, the former mayor of Jerusalem who hopes to succeed Prime Minister Benjamin Netanyahu as head of Likud, said Netanyahu was wrong in his “considerations” and should have stepped down in recent weeks, thus thwarting the performance of Likud. oath expected Sunday from a coalition of eight parties from across the political spectrum, with the exception of Likud.

If Netanyahu had stepped aside, Barkat said, “Likud and the national camp would have formed the government on Sunday.”

Barkat spoke in an interview broadcast on Saturday as a TV poll showed him in second place, behind former Mossad leader Yossi Cohen, as the preferred candidate of Likud voters to succeed Netanyahu should he have to. resign as party leader. (Netanyahu has made it clear that he will lead Likud into opposition if the Naftali Bennett-Yair Lapid coalition is approved by the Knesset, as expected, on Sunday, and pledged to quickly bring down what he calls “a dangerous left government ”.)

When asked who they would support as Likud leader if Netanyahu retires, 27% of Likud respondents responded Cohen, followed by MP Barkat with 16%, according to the Channel 12 news poll.

Cohen is considered to have enjoyed a close personal relationship with Netanyahu throughout his tenure. It is widely reported that the prime minister has cited Cohen in the past as a potential successor.

After Barkat, the poll gave Israeli Ambassador to the United States and United Nations Gilad Erdan the support of 8% of those polled, followed by Finance Minister Israel Katz with 5%, Health Minister Yuli. Edelstein with 5%, Knesset Speaker Yariv Levin with 3%, and Transport Minister Miri Regev with 1%. Another 10% gave other names.

The survey, conducted by pollster Manu Geva, included 504 respondents and had a 4.4% margin of error.

Cohen, whose tenure as head of the spy agency ended earlier this month, said in an interview broadcast Thursday that he was not ruling out running for prime minister someday, although he was not considering such a decision at the moment.

The interview was surprisingly candid and included revelations about Israel’s activities to thwart Iran’s nuclear program. 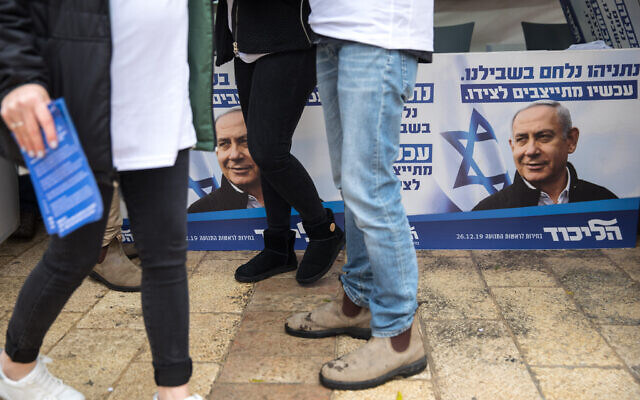 While the so-called “change bloc” of parties is expected to be sworn in in government on Sunday, Netanyahu has indicated that he plans to remain chairman of Likud and continue leading the party in opposition.

In his interview on Saturday, Likud’s Barkat told Channel 12 that “the prime minister was wrong in his considerations. If the Prime Minister had said, “I’m stepping aside” and sought to organize primaries for the leadership of the national camp, my assessment is that the national camp would have united behind the [winning] candidate.”

The interview was filmed Thursday evening when Barkat organized a rally of some 4,000 Likud activists in Tel Aviv. The office was seen as a show of force in the party and an indication that he will join a growing list of senior Likud officials lining up to challenge Netanyahu for the party leadership.

Barkat added that Netanyahu “was wrong in his considerations because if he had allowed [primaries], Likud and the national camp reportedly formed the government on Sunday.

Several parties in the change bloc have said they would be happy to form a coalition with Likud as long as Netanyahu does not lead it.

Barkat also told Channel 12 that he would run for Likud leader when Netanyahu steps down and vows to win the race. At the Tel Aviv event, Barkat called for the leadership primaries to be delayed.

Netanyahu convincingly won the Likud primaries in 2019 when he defeated a challenge from former party minister Gideon Saar. Saar then left Likud in 2020 to found the New Hope party, which campaigned not to sit in a government under Netanyahu and intends to be part of the new coalition.

Likud has postponed another round of primaries since then, amid political turmoil that saw four inconclusive elections in two years.