Shontel Brown, a Cuyahoga County councilor, stepped back in the polls to win a critical Democratic primary in a Cleveland-area district with a large Jewish population, with considerable help from a political action committee traditional pro-Israel.

Dave Wasserman, the political editor of the Cook Political Report, called the elections in Ohio’s 11th District on Tuesday night for Brown, who faced Nina Turner, a former state senator who co-chaired the 2020 presidential election of the U.S. Senator. Vermont Bernie Sanders, the party left flag bearer. The AP also called the race for Brown.

Turner, who once enjoyed a 35-point advantage over Brown, has seen his lead rapidly diminish in recent days and ended up being revised by Brown in a crowded field of 13 candidates vying for the seat left vacant by the Former Rep. Marcia Fudge, operated by US President Joe Biden will be her housing secretary.

Turner was a leading national voice for Bernie Sanders’ presidential campaigns, and the U.S. Senator is part of a long list of progressives, including Senator Ed Markey, Representatives Alexandria Ocasio-Cortez and Representative Rashida Tlaib to support the first favorite.

The election is seen as a litmus test for the Democratic Party, which finds itself divided by those who view Biden’s election as proof that a moderate approach is more effective in winning voters and those who note the rapid rise of the progressive wing of the party, which is particularly popular with young people.

The standoff between moderates and progressives has ramifications for Israel’s support in Congress, where the latter group has begun to reduce carefully cultivated bipartisan support for the Jewish state.

Identifying the change as a major threat, the Democratic Majority for Israel (DMFI) lent its support to Shontel Brown, spending some $ 2 million on behalf of the centrist. These ads included a series of attacks on Turner, highlighting comments she made against Biden which she compared to “[half] a bowl of shit.

“We are delighted to congratulate Councilor Shontel Brown on her superb upset primary victory tonight, and we are proud to have supported her successful campaign for the Democratic nomination in Ohio’s 11th district,” said the President of DMFI PAC, Mark Mellman at the race call. 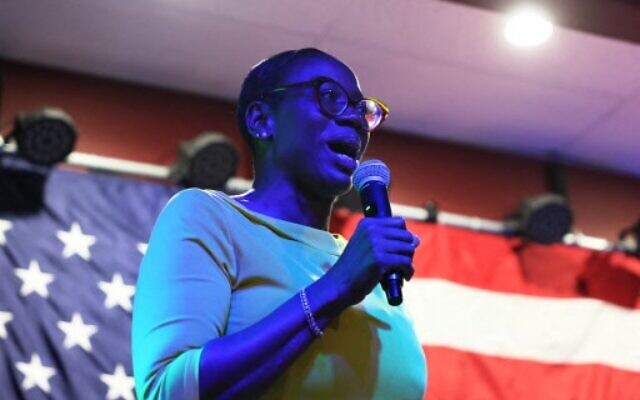 “This is a huge victory, not only for City Councilor Brown personally, but also for the pro-Biden-Harris, pro-Israel majority within the Democratic Party,” he said.

“The JDCA was proud to support Brown in this race and to mobilize Jewish voters in his favor. The JDCA knew that Jewish voters could make a difference in this election given their relatively high turnout and overwhelming support for Brown, and we were right, ”JDCA said in a statement after the results were released.

During her # OH11 victory speech, @ShontelMBrown thanks “my Jewish brothers and sisters” and expresses support for the relationship between the United States and Israel. pic.twitter.com/tPvIKDPBFp

Turner had insisted that she was not opposed to the Jewish state and that she was both pro-Israel and pro-Palestinian. She spoke out against the Boycott, Divestment and Sanctions movement, while specifying that she also opposes legislation to curb BDS. The former state senator also supports US military aid to Israel, but says it should be conditioned to prevent it from being spent beyond the Green Line.

During the recent Gaza conflict, Turner retweeted a message from the far-left anti-occupation group IfNotNow urging the State Department “to say #SaveSheikhJarrah and #EndApartheid”.

Brown has taken more traditional party positions on Israel, supporting a two-state solution but also opposing BDS and conditioning US aid to Israel. She also spoke at a pro-Israel rally in Cleveland during the Gaza war in May, in which she condemned the rocket attacks by Hamas.

In addition to the Jewish population, the neighborhood is 53% African-American, and nearly a quarter of the residents live in poverty. The winner of the primary in the solidly blue district will likely go on to win in the November general election.

Agencies contributed to this report

As an environmental reporter for The Times of Israel, I try to convey the facts and science behind climate change and environmental degradation, explain – and criticize – official policies affecting our future, and describe the Israeli technologies that can be part of the solution.

I am passionate about the natural world and disheartened by the dismal lack of awareness of environmental issues among most of the public and politicians in Israel.

I am proud to do my part to keep The Times of Israel readers properly informed on this vital topic – which can and must lead to policy change.

Your support, by joining The Times of Israel community, allows us to continue our important work. Would you like to join our community today?