After years of booming trade, some see Israel-China relations beginning to deteriorate

As U.S. House of Representatives Speaker Nancy Pelosi traveled to East Asia this week on a trip that could dramatically change U.S.-China relations, an event in Israel was unfolding that bore recognition that Jerusalem’s own relationship with Beijing was already changing.

“The honeymoon in Israel-China relations is over,” former general Assaf Orion said Monday at the launch of the Israel-China Policy Center in Tel Aviv. “A series of indicators show that we are in a new period in the relations between the countries and the links are now more complex and charged than before.”

The new center will be run under the auspices of the Institute for National Security Studies, a Tel Aviv think tank with close ties to the Israeli military and government. Chinese Ambassador to Israel Cai Run attended the opening on Monday, along with Intelligence Minister Elazar Stern and senior Israeli diplomats, as well as envoys from India, Vietnam and other countries.

In January, the Israeli Foreign Ministry celebrated 30 years of diplomatic relations with China by touting the $18 billion trade relationship between the countries.

According to Orion, however, Chinese investment in Israel and Israeli exports to China peaked in 2018.

Researcher Assaf Orion speaking at the launch of the Israel-China Policy Center at the INSS think tank in Tel Aviv on August 2, 2022. (Tal Schneider/Times of Israel)

Since then, both indices have been falling, and over the past six years the number of Israeli companies exporting to China has dropped by 15% to 480 companies.

The timing dovetails with growing pressure on Israel, first from former US President Donald Trump’s administration and then from Joe Biden’s White House, to monitor the trade relationship more closely, particularly in with regard to potentially sensitive large agreements.

In 2019, Israel’s security cabinet announced the formation of an advisory group on foreign investment in the country, after dragging its feet on the issue for several years while trying to balance its ties with Washington and Beijing. 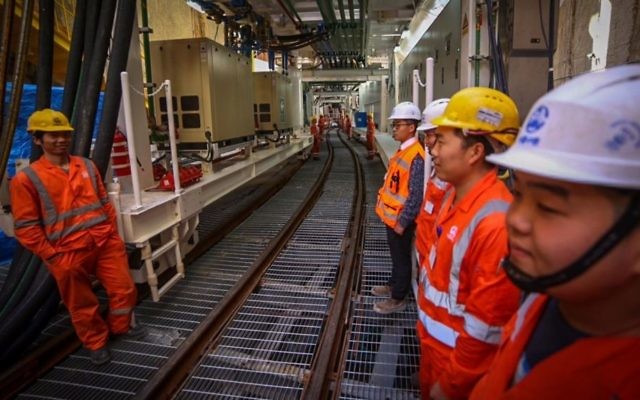 Although the panel arrived too late to have a say in infrastructure projects already underway, such as the Tel Aviv light rail and Haifa port work, it managed to block other deals underway. and contributed to chilling trade relations.

“China has become the largest trading partner in Asia and the second largest in the world,” the ambassador said. “Before the outbreak of the COVID-19 pandemic, direct flights were open between Tel Aviv and five Chinese cities.”

China remains Israel’s largest trading partner in Asia; Israel imports more from China than anywhere else and exports more to China than any other Asian country. From 2011 to 2021, the share of Israeli exports to Asia destined for China increased from 25% to 42%. 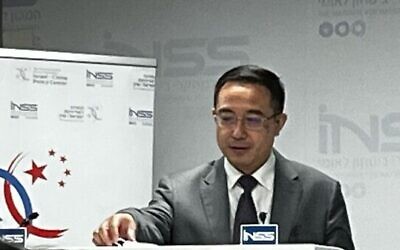 Chinese Ambassador Cai Run speaking at the launch of the Israel-China Policy Center at the INSS think tank in Tel Aviv on August 2, 2022. (Tal Schneider/Times of Israel)

Israelis appear divided over how they view China, which has been criticized for its stifling authoritarianism and alleged crimes against humanity against the Uyghur Muslim minority in the west of the country.

According to the results of a Pew poll released in June, 48% have a favorable view of China, more than any other Western country surveyed, while 46% were down on Beijing. Israelis were the least concerned globally about human rights issues in China or Beijing’s growing military power, though slightly more nervous about economic competition with China or Chinese interference in internal affairs.

Orion, however, noted that in other years favorable views of China have been even higher. In 2019, 66% had a favorable view of China and only 25% were unfavorable, according to Pew. 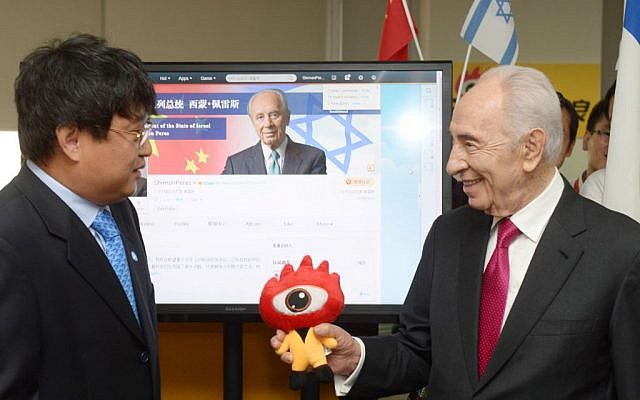 Then-president Shimon Peres during a visit to the Weibo company headquarters in Beijing, China April 9, 2014, where he launched his official Weibo page. (Amos Ben Gershom/GPO/Flash90)

Orion led strategy in the Israel Defense Forces General Staff’s Planning Directorate before leaving the military in 2015 after 32 years. Since then, he has worked as a researcher at the INSS, at the head of its China program.

The institute is considered very close to the defense and foreign affairs branches of the Israeli government. Many of its scholars are former senior defense officials or high-ranking diplomats, and its position papers are regularly circulated among senior officials in the Department of Defense, Department of Foreign Affairs, and National Security Council. The launch of the center was seen as a reflection of the seriousness Israel is taking in its strategy with China as the relationship evolves.

Despite Orion’s gloomy predictions, Stern expressed hope that the relationship would bloom again.

“We hope Orion is wrong in its assessments of the downward trend,” the intelligence minister said. “Of course, Orion as a researcher cannot ignore trends based on data, so we see this as a challenge, to change the situation and bring it back to where we were.”

Join the Times of Israel community